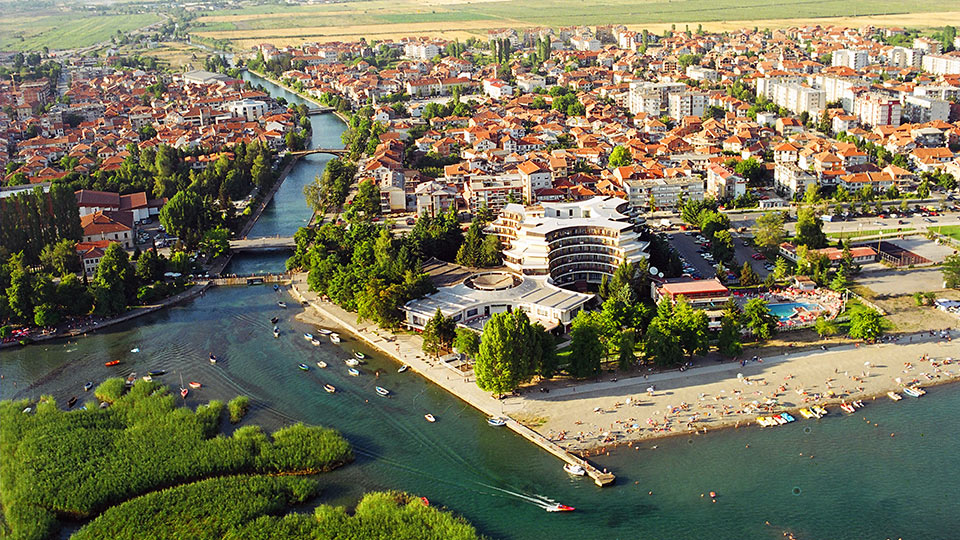 Struga is a city in the southwestern part of the Republic of Macedonia and a centre of the Municipality of Struga. It lies on the plain of the Struga Field on both banks of the River Crn Drim and on the northern coast of Ohrid Lake. The ancient name of the city is Enhalon, which in ancient Greek means eel, and at that time the city was a small settlement. Later the settlement obtained its name Struga.

The name of Struga

Struga's name stems from a pure and distinctive Slavic word. The people of Struga and Ohrid provide two explanations of the origin of this name. According to the first folk interpretation, the name comes from the open geographical position of the city: a place where the wind constantly blows.


The second is quite different: The Macedonian Slavs (Brsjaci and Mijaci) in Struga had long been involved in animal husbandry and in that definite time they were setting the numerous sheep for shear – strig (shearing of wool) near the mouth (usta) of Crn Drim from Lake Ohrid. However, it can be more logically linked to the passage through a sheep milking fence, called struga (straga, stronga). Some authors claim that the city is called so because Crn Drim passes through the daljans (a Turkish word for a place surrounded by reeds and other material for eel and fish hunting in general). Perhaps the closest to the truth is the explanation that Struga means a river sleeve, tributary, it in a place with fishing devices. 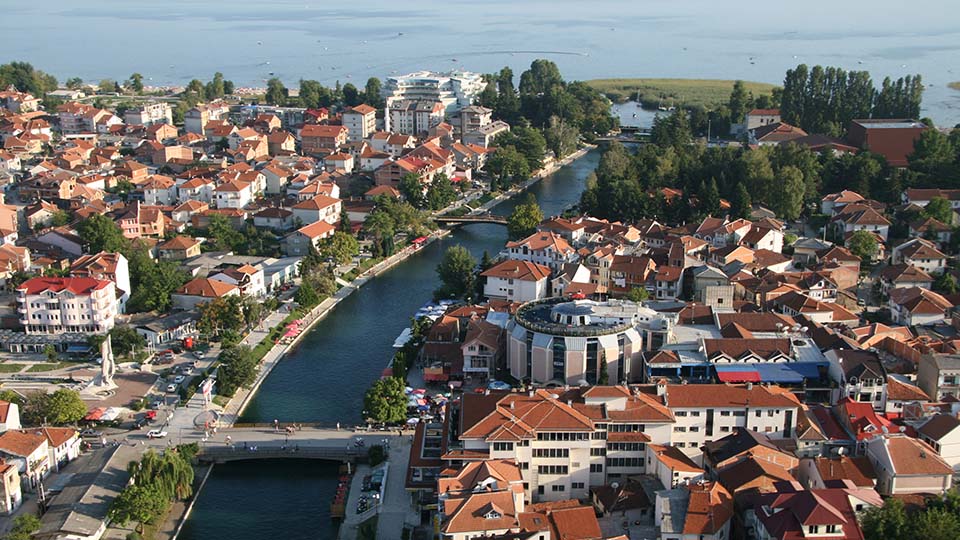 The history of the city

For the first time under the Slavic name Struga, the town is mentioned in a document from the 11th century. Struga is an old settlement that originated from the Neolithic period. In antiquity, it benefited immensely, because it was on the Via Egnatia road, which connected the Eastern and Western Roman Empire. Archaeological findings and the discovered written monuments reveal that life here dates back to prehistory. The first Neolithic settlement was registered about 3,000 BC. Surrounded by mountainous landscapes to the west is Jablanica, to the northeast Karaorman and to the southeast Galicica, as well as the openness of the Struga Field, required lower annual temperatures. 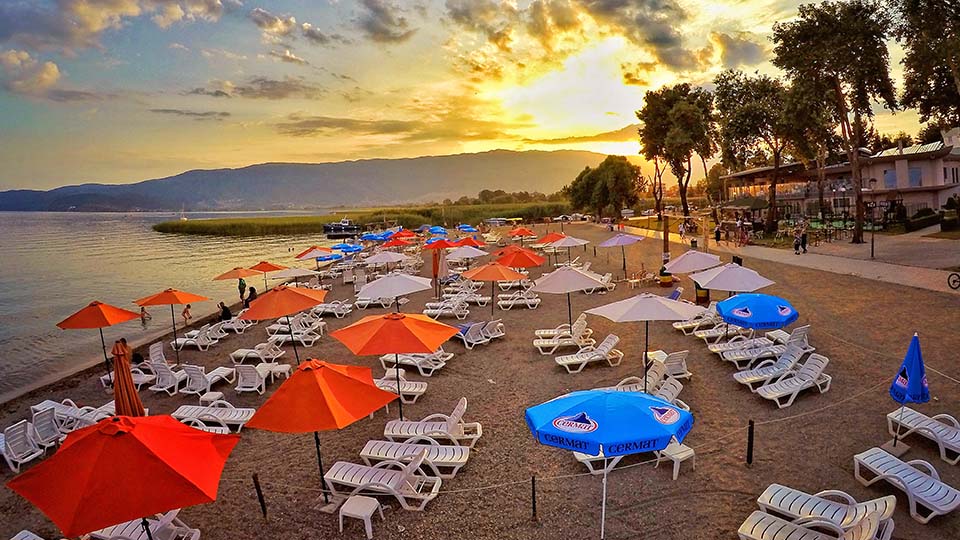 The geographical position of Struga, the openness of the Struga valley, the mountains around the city, as well as the proximity of the lake, enable the wind to blow from all sides in Struga. The winds are divided into permanent and local. To the permanent winds, belong the winds from the south and from the north. Winds from the north usually come along the valley of the Crn Drim River and carry freshness throughout the year, but most often in winter. The southern wind blows usually in March and April, and less often in May. The southern wind is suitable for hunting of eel, bleaks, and rutilus rubilio ochridanus. Local winds are a product of unequal warming of the mainland and lake water. The characteristic wind for the Ohrid Lake is the wind Strmec. It comes from the surrounding mountains and is therefore cold, blowing all night to sunrise with a silent wind and full wave.

Ideal for a peaceful walk and enjoying a beautiful view along the water itself, the Crn Drim quays have benches and shadows and are connected with three bridges. The quay on the eastern side of the river's outflow from the lake is called "Sergei Yesenin" and is located next to the entrance to the city beach. On this quay, besides Yesenin, there are busts of Adam Mickjevich and Aco Shopov. The water from the Ohrid Lake flows through the river Crn Drim which, passing through the middle of the city, through the Struga Field and the ravine, continues through Albania and flows into the Adriatic Sea. The outflow of the water near the Hotel Drim is a special attraction for every visitor to Struga. 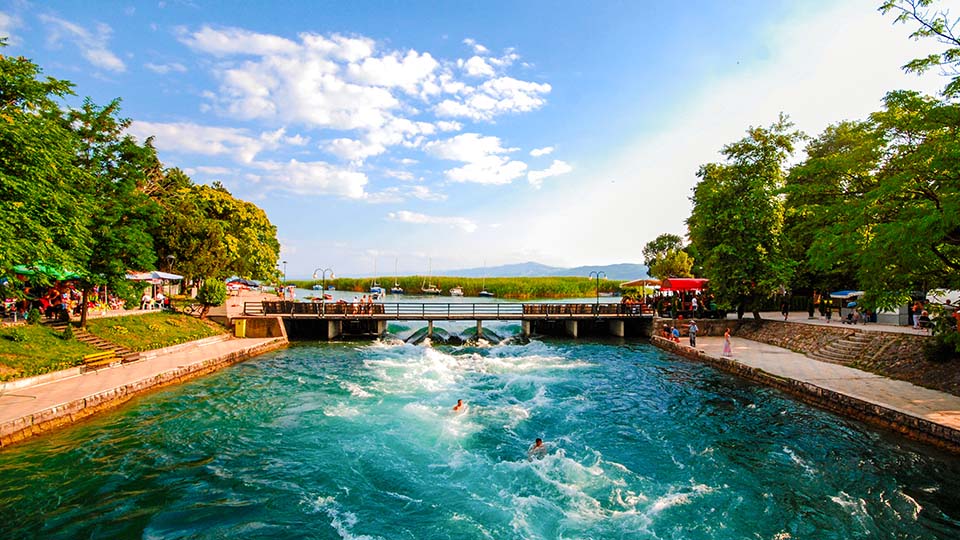 St. Gjorgji is a city cathedral church in the centre of Struga. It was built on the foundations of a much older church from the 16th century. It contains frescoes from the end of the 19th century, but the real treasure is the small gallery of icons from the 13th century until the 19th century, including the famous icon of St. Gjorgji painted in 1267. The long inscription on the background of the icon means "Struga Ohridska". 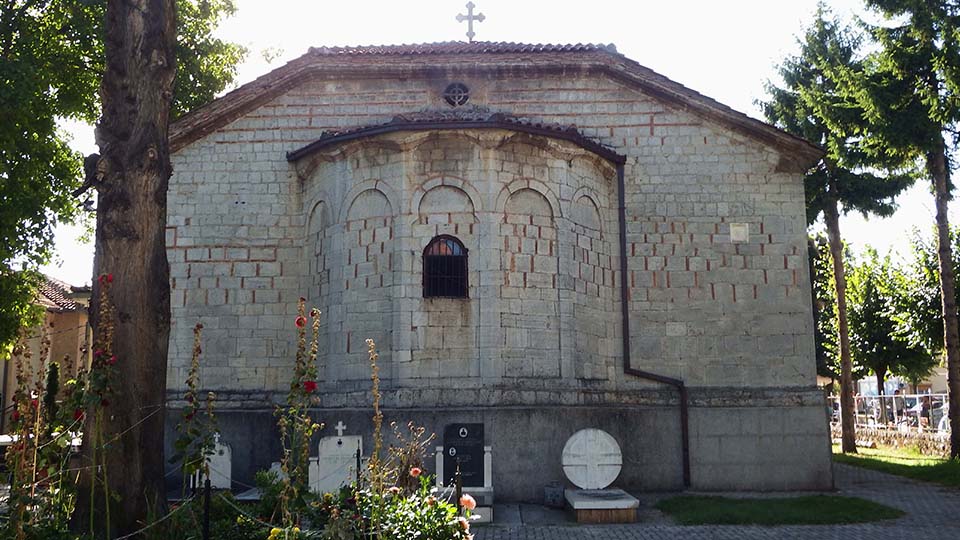 The National Museum in Struga was founded in 1928 by Dr. Nikola Nezlobinski, a Roman emigrant who came to Struga after the Russian Revolution in the 20s of the last century. At the beginning, a natural science department was opened, with a permanent zoological collection composed of his personal collection, which today is enriched with various insects, birds, fish and animals from the Ohrid-Prespa region. Nezlobinski and his associates prepared hundreds of insects, birds and animals living in swamps near Struga. Later, in 1961, an archaeological department was established in the museum, which houses a rich collection of items from prehistoric times to the Middle Ages. In 1974, the art gallery Vangel Kodzoman, a famous artist from here, was created with a permanent artistic setting. The museum carries out research and collection of materials in the fields of history, archeology, ethnology, botany and zoology. 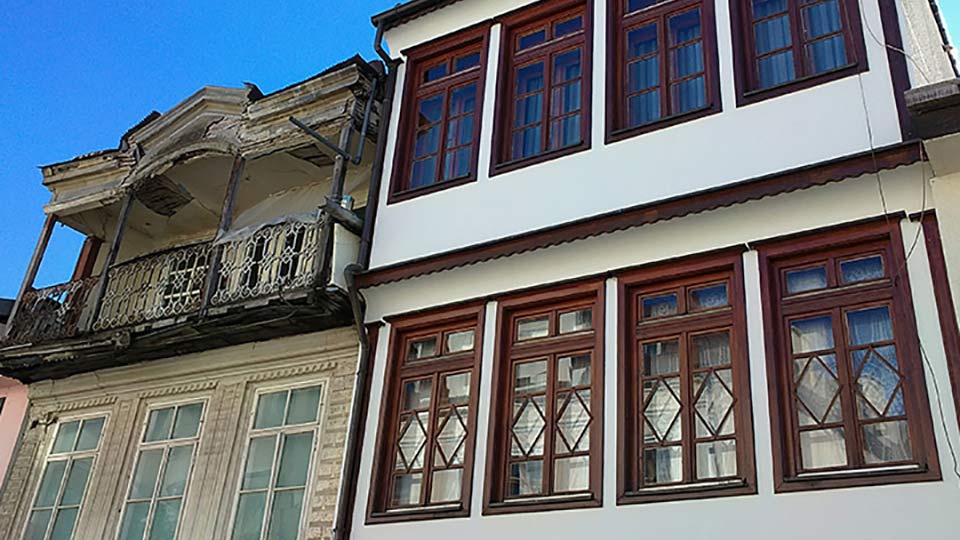 Memorial house of the Miladinovci brothers

The memorial house of the brothers Dimitar and Konstantin Miladinovci is located in the centre of Struga. It is renovated on the foundations of the old house of Miladinovci. It contains materials from the life and works of these famous Macedonian revivers, winners of the Golden Wreath of Poetry. In honour of their poetic achievements and collections of folk songs and creations, published in the famous work Collection of Folk Songs, today the famous poetry manifestation Struga Poetry Evenings is held. The event traditionally begins with the unforgettable poem Longing for the south by Konstantin Miladinov, written while he was staying in Moscow. 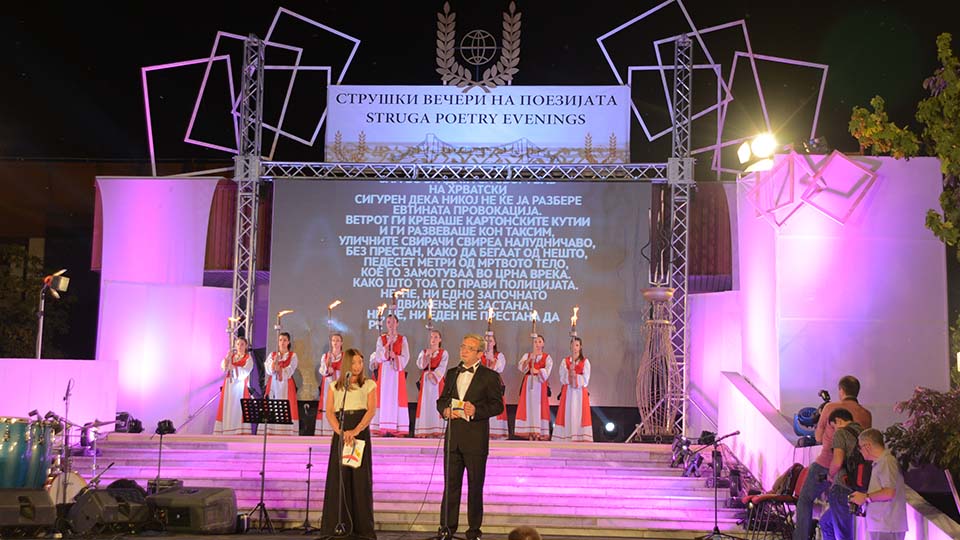 Five kilometres south-west of Struga, on the shore of the lake is the village famous for the old churches and monasteries and fish specialties. In Kalishta, on the very shore of the Ohrid Lake, in the natural rocky setting there is the monastery of the Nativity of the Holy Mother of God, among the people known as the Kaliste Monastery. Within the complex there is a cave and a new church dedicated to the Nativity of the Holy Mother of God, the church dedicated to the Holy Apostles Peter and Paul and the cave church dedicated to St. Athanasius. The new church was restored in 1977, and the foundations date from the 13th century. There is monasticism and an active monastic life in the monastery. 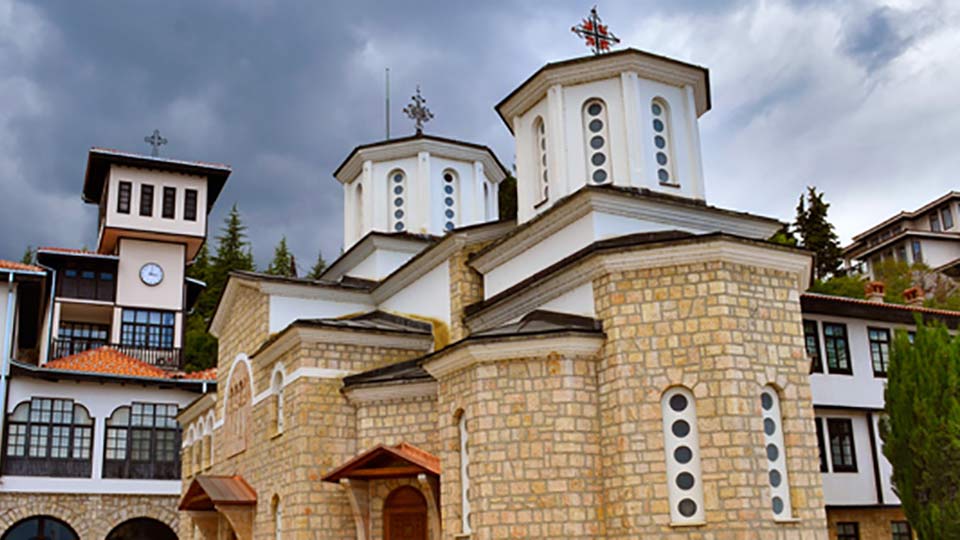 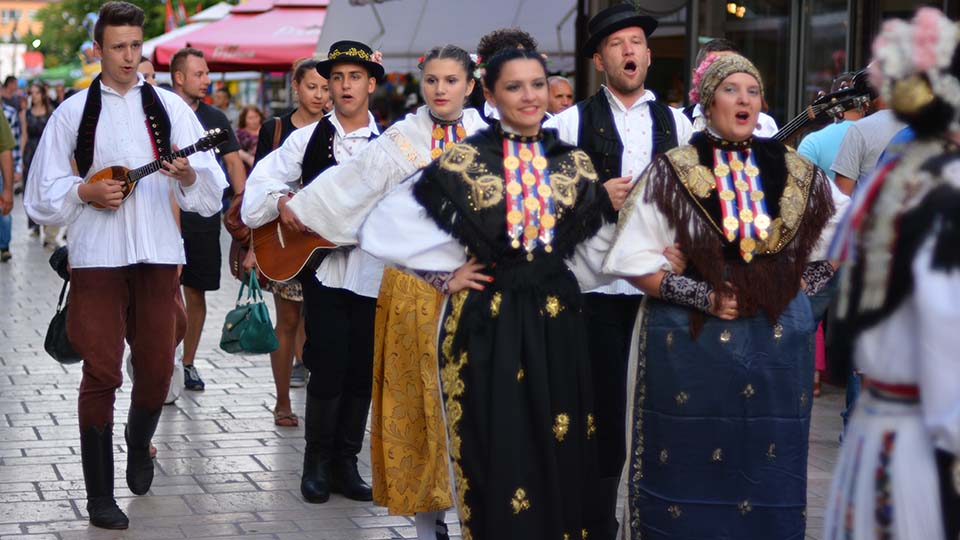 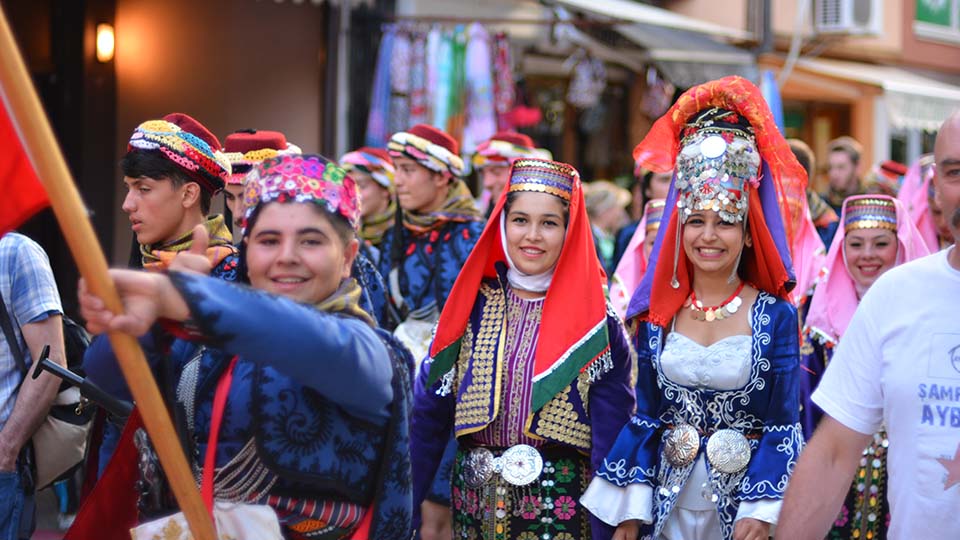 More information about Struga can be found on this website.