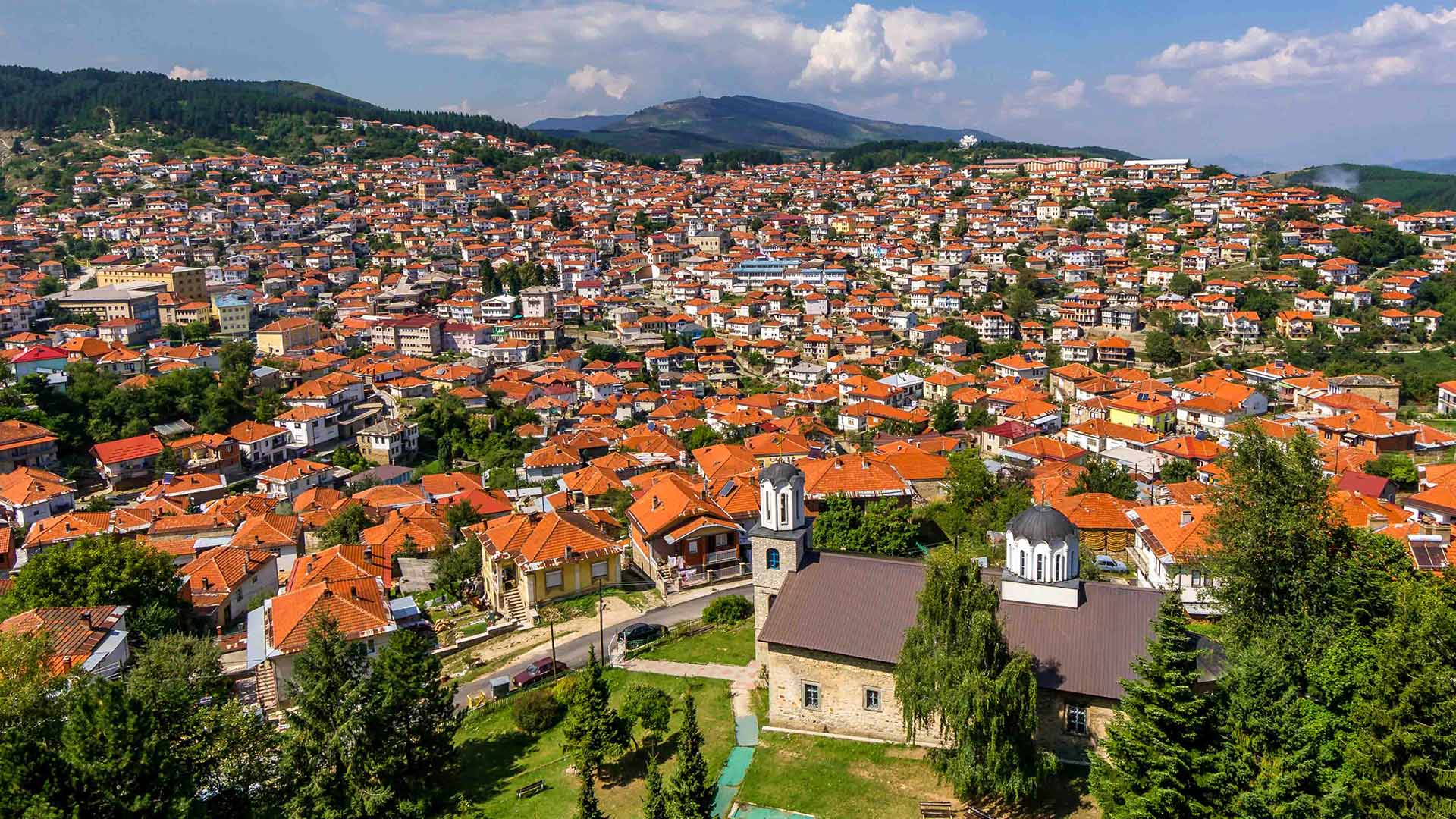 Krusevo is a city in the western part of the Republic of Macedonia, in the foot of Busheva Planina. It is the city of the former Krusevo Republic.

Above the city is the famous monument Makedonium. With 1,350 metres above sea level, Krusevo is the only mountain city in Macedonia and the highest city in the Balkans. Krusevo is mentioned for the first time in the historical sources from 1467, as a mezra i.e. a village within the property of Hussein Bey. In the Slepcanski Kodik that the monks led from 1544, the name Krusevo refers to the present settlement. During the Turkish rule, it was a small Slavic village, and at the end of the 18th century it belonged to Qerim Bey from Ohrid, to who the population paid taxes until 1847.


Early development of the city

As a developed and organized urban settlement, Krusevo was established in the late 18th and early 19th century. For the establishment of Krusevo as a city settlement, the migration of the Vlachs from Moskopole and its surroundings from 1769 to 1788 was significant and they established the Vlachs’ Maalo. In the beginning of the 19th century, in the period from 1812 to 1821, a second group of Vlachs arrived, but now not from Moskopole, but from the mountain Gramos. They founded a new neighborhood called Strunga. Based on their occupation, they were mainly cattle breeders and developed cattle breeding. At the same time, a group of Orthodox Albanians came to Krusevo from southern Albania, who founded the Arnaut Maalo on the left and right of Krushevska Reka. At the same time, a large number of Macedonian cattle breeders from the Mijak villages migrated from the surrounding villages: Galicnik, Lazaropole, Tresonce, Gari etc. who founded the Mijak Maalo.

The economic growth influenced the urban community positively, so that in the first half of the 19th century, Krusevo received the character of a city community. Due to the poor security before the end of the Turkish rule, the Christian population of the surrounding villages, during the 19th century, continued to move to Krusevo, increasing the population in the already established city.


As a craft and trade centre, it developed very fast and already in 1883 about 12,000 inhabitants lived there. During the Ilinden uprising, the city was liberated on August 2, 1903 and the Krusevo Republic was established. An interim government of six members and a national assembly with 60 delegates was elected. The republic existed until August 13th. On the morning of August 12, the city was attacked by 15,000 Turkish soldiers led by Bakhtiar Pasha. Significant battles for the defense of the Republic were led at Meckin Kamen and Sliva. After the suppression of the Ilinden uprising, Krusevo was burned down, and a large part of the population of the city and the surrounding villages were evicted.


Geographical location of the city

Krusevo lies on the western mountain edge of the Pelagonia Valley, in the spring valley section of the Krusevo River. This river divides the city into two parts: the larger on the left and the smaller one on the right. The houses in the city are set amphitheatrically. Because of its specific morphoplasty, Krusevo is considered to be a typical mountain town, which has an average altitude of 1350 metres, and is therefore regarded as the highest town on the Balkan Peninsula. It is 25 km to the north of Demir Hisar, 32 km to the west of Prilep and 52,5 km to the north of Bitola. 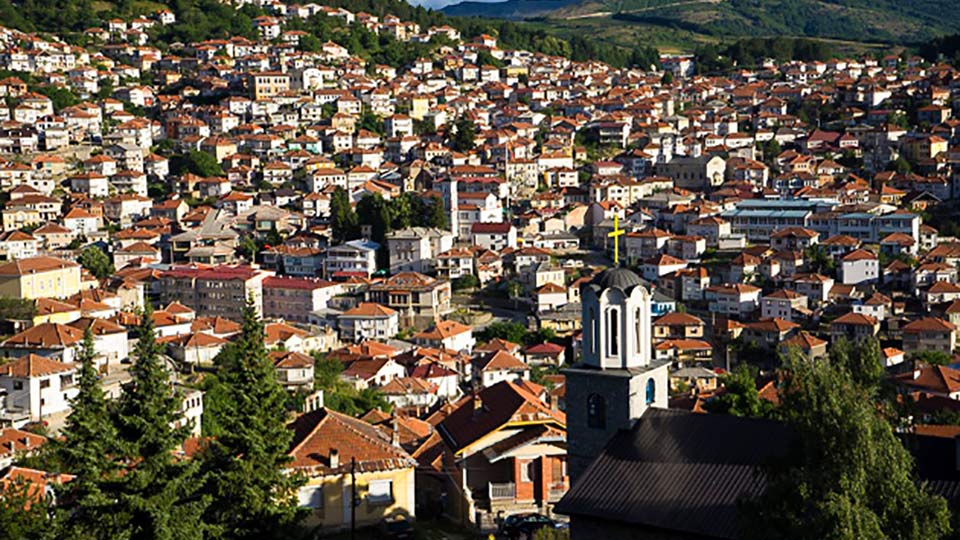 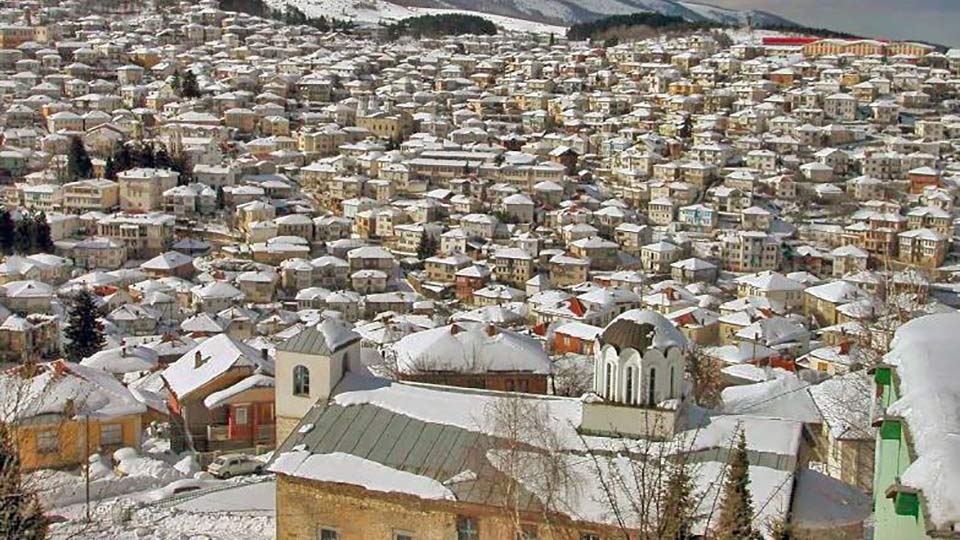 Krusevo builders, painters and woodcarvers become famous names in other parts of Macedonia, as well as in the neighbouring countries. Among the oldest sacral buildings, which were built in Krusevo, is the church "St. Nikola" (1832), burnt down during the Ilinden uprising in 1903. This main church is famous for the renowned iconostasis, created by the group of Petre Filipovich - Garkata.


The fresco paintint was popular in those years. According to some selective data, preserved above all on the icons in the churches, the names of several painters, outsiders, or those from Krusevo are mentioned. Among them we have prominent figures with reputations of outstanding masters, whose painting work has left permanent artistic marks in the environment where they were created. Such an example are the two families of painters - Zisi and Atanasovi. Especially Mihail and his sons Dimitri and Nikola (Lakja). The painter Dimitrie, as noted in one place by the chronicler "... experienced in his craft unlike any other in a Turkish country ...".

In the centre of the city, the streets of the neighbourhood, steep and narrow, are twisted, broken and climbing, following the terrain and unwritten rules of the old urban agglomerations. The Bazaar is made up of a series of small craftsmen and trade shops, arranged next to each other. It is the most picturesque part of the city, to which the neighbourhoods follow, where the whole life takes place. From the formerly world famous Krusevo bazaar some of the old crafts: tinker, goldsmith, coppersmith, cobbler, and other crafts are still present. All of them work as barrel-makers, wood-carvers, copperplate-carvers, bakers, carpenters, etc. 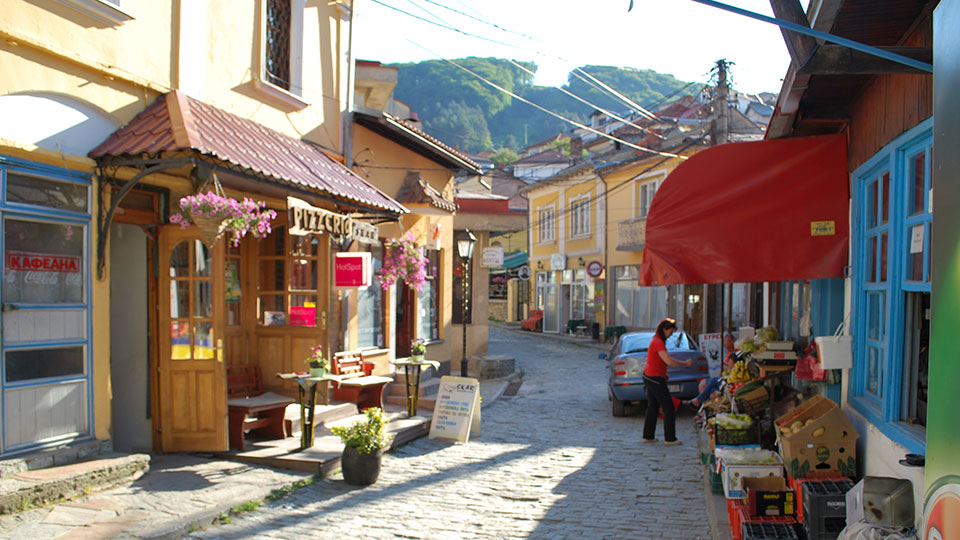 The winter season in Krusevo lasts from November to the end of March. The winters are mild, sunny and fairly snowy. The ski slopes of the Bushava Mountain on both sides are 1,200 metres and 1,400 metres. Krusevo attracts winter sports lovers with beautiful ski slopes and winter running trails that are not far from the city. The ski slopes are located on the site Stanic, equipped with ski lifts (two-seaters and one-seaters). The monastery St. Preobrazenie is located on the highlands of the Bushava Mountain, in the area Ruchalo, close to the site Sliva. It is built on the foundations of the old church and surrounded by beautiful nature. It was renewed from the 1980s to the present. Krusevo is about five kilometres away, connected with a modern traffic road. It is a site with excellent features for rest, recreation, hiking and possibilities for accommodation in nature. The Ilinden Memorial Complex, also known as Makedonium, is one of the most remarkable monuments in Krusevo and Macedonia. It was established on August 2, 1974, at the thirtieth anniversary of the ASNOM session and the 71st anniversary of the Ilinden Uprising and it is located immediately next to Krusevo, in the site Gumenje. It is a complex of four platforms that symbolize the invincibility, the struggle and the eternal aspiration of the Macedonian people for freedom and an independent state. 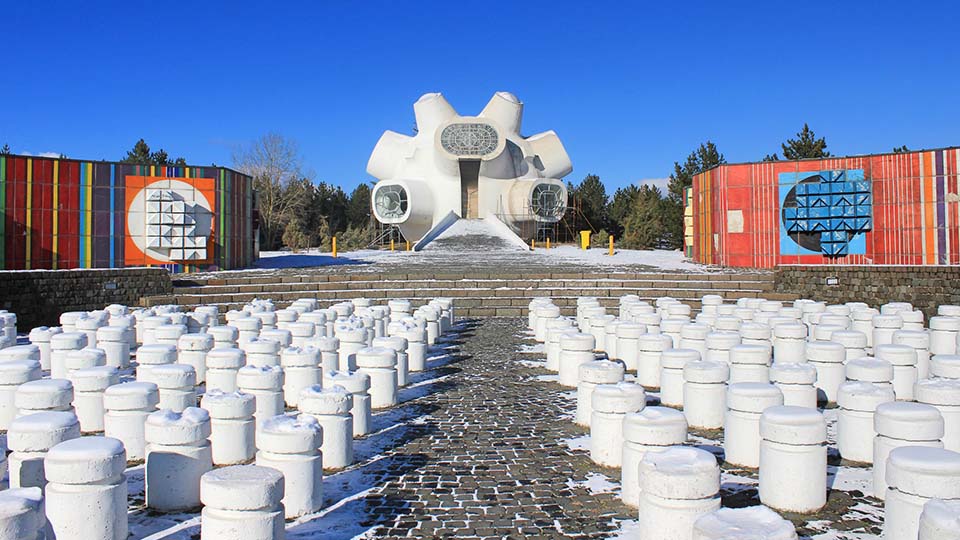 The complex extends to 12 hectares, while the Makedonium itself, located on the highest point, ends with a dome at 1,320 metres above sea level, from which a splendid view to all four sides extends - towards Krusevo, Sliva, Mechkin Kamen and Pelagonija. The interior of the dome impresses with its reliefs, glazing with the eternal flame and the sounds of the orthorium Sun of the ancient country by Toma Proshev.

The monument Meckin Kamen is a site near Krusevo. The bravest battles during the Ilinden Uprising in 1903 took place at the same place. The monument was built in honour of the brave Ilinden uprsing soldiers. The site is a pleasant place to stay. 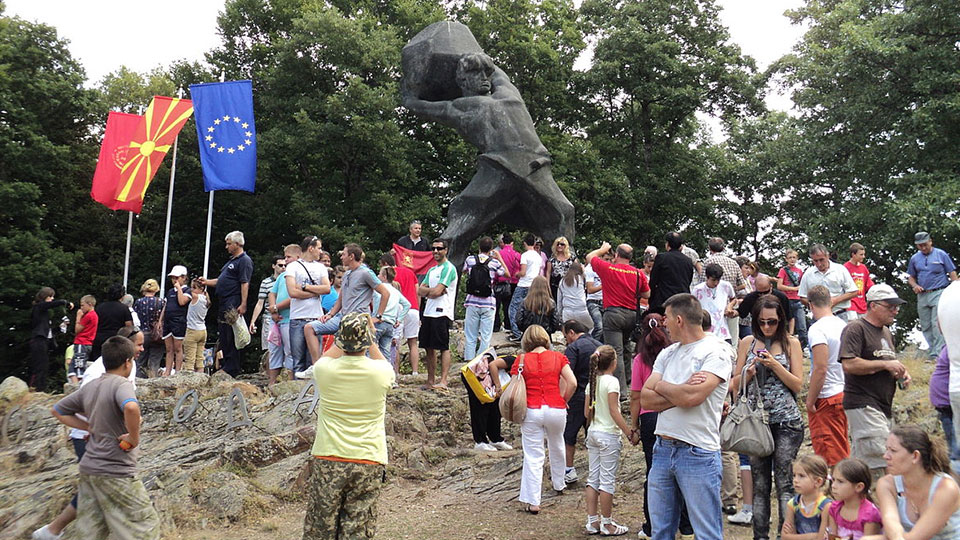 Museum of the Ilinden Uprising and the Krusevo Republic

The museum is housed in an old town house from the 19th century, in which the Krusevo Republic was proclaimed in 1903. It was opened on August 2, 1953, marking the 50th anniversary of the Ilinden uprising and the Krusevo Republic. The museum contains original photographs of the members of the Interim Government, the Council and the uprising rebell groups, maps, objects used by Nikola Karev, Pitu Guli, models, texts, the Krusevo Manifesto, documents on the turnout of the Ilinden Uprising and the Krusevo Republic in the foreign press. There are also data on the great human and material damages inflicted on the city by the Turkish army. The setting of the bullet foundry, which existed during the Ilinden Uprising, was established in 2003. It contains original tools used for bullet casting during the uprising. 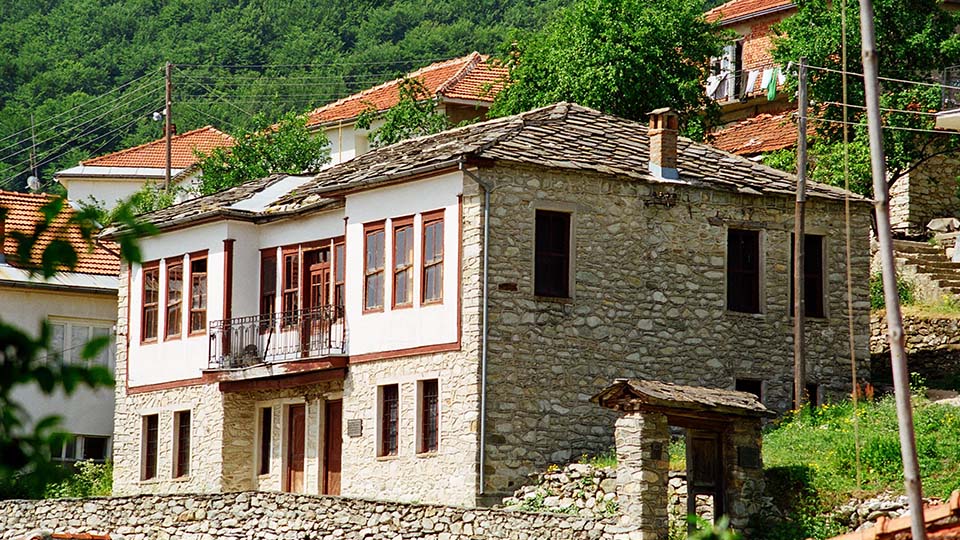 Museum of the People's Liberation War

The People's Liberation War museum is located near the plateau of the Ilinden monument in the area of Gumenje. It was opened in 1988 and contains exhibits that testify to the People's Liberation Struggle from 1941 to 1945. The museum is dominated by a wall fresco on the frontal wall - the Muralot, which depicts the course of the war, the work of the great master of colours, Borka Lazeski.

Tose Proeski (January 25, 1981 - October 16, 2007) became the most popular singer in Macedonia for a short time and one of the biggest stars on the Balkan music scene. In 2004, he was proclaimed UNICEF ambassador of goodwill. He was tragically killed in a car accident. Posthumously, Tose was proclaimed honorary citizen of Macedonia. Krusevo, his birthplace, paid tribute to him by opening the memorial house on April 25, 2011. 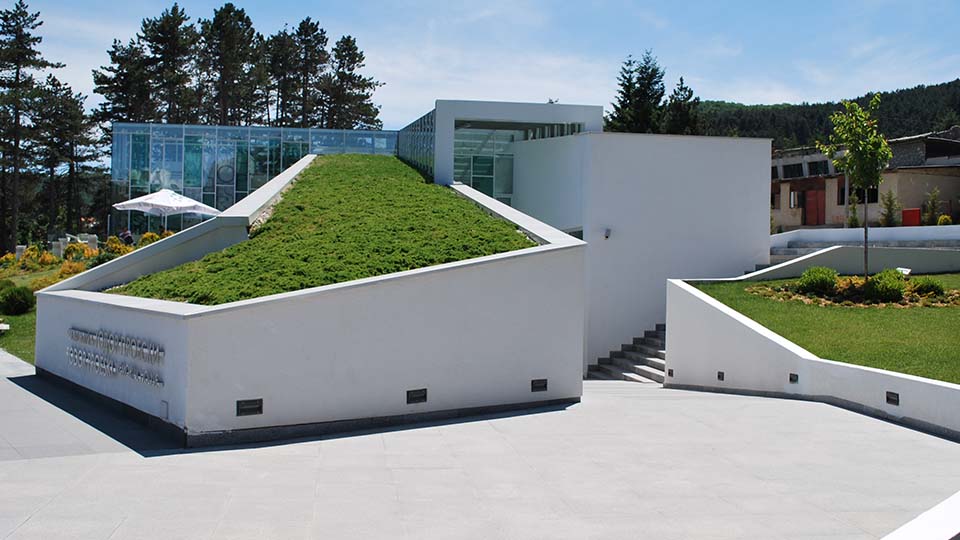 The facility was built of concrete and cross-shaped glass on an area of 870 square metres. The museum setting provides a chronological display of his childhood and teenage years to the time when Tose reached the peak in his artistic career enriched with 350 authentic exhibits owned by the Proeski family. In the central part there is a prayer book, Tose’s religious items and several of his written thoughts about love, family, friendship. Part of the settings are Tose's two natural size wax figures.