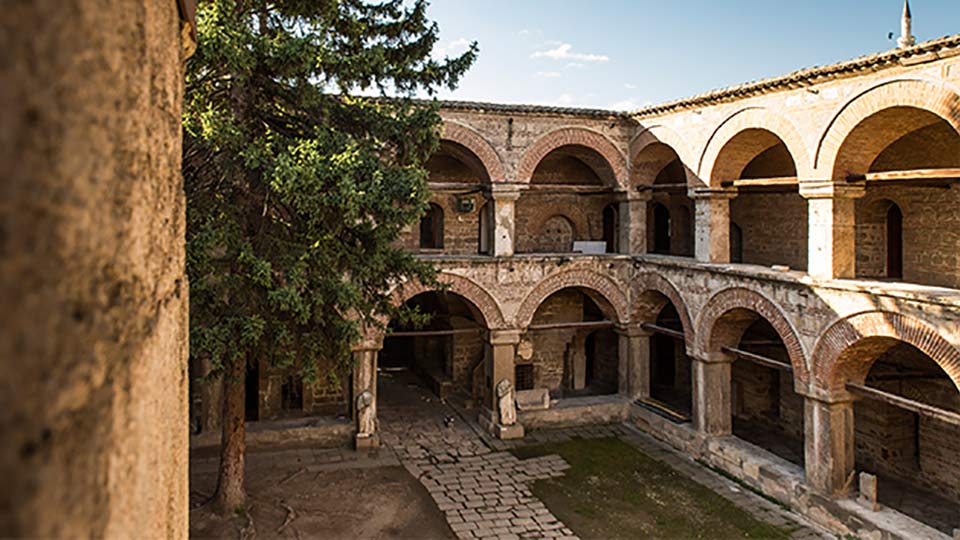 The largest of the former caravan-serraglios Kurshumli an, is located on the place of the former iron bazaar, in the immediate vicinity of the buildings of the Museum of Macedonia in Skopje. There are no specific data on the construction period of Kurshumli an, although it is assumed that it was built during the 16th century, about 1540, in the place of an older building. According to Stojan Novakovic and Gideon Jurisic, it was built in the 16th century and served as a military barracks. While Ivan Jastrebov believes that due to the applied masonry technique and the construction method, the facility was built in the time of Emperor Justinian I in the 6th century. The third opinion is that it was built by the Dubrovnik merchants who created their own colony in the city. Turkish sources say that the an was built as a testament to Mula Musledin Odza in 1550. 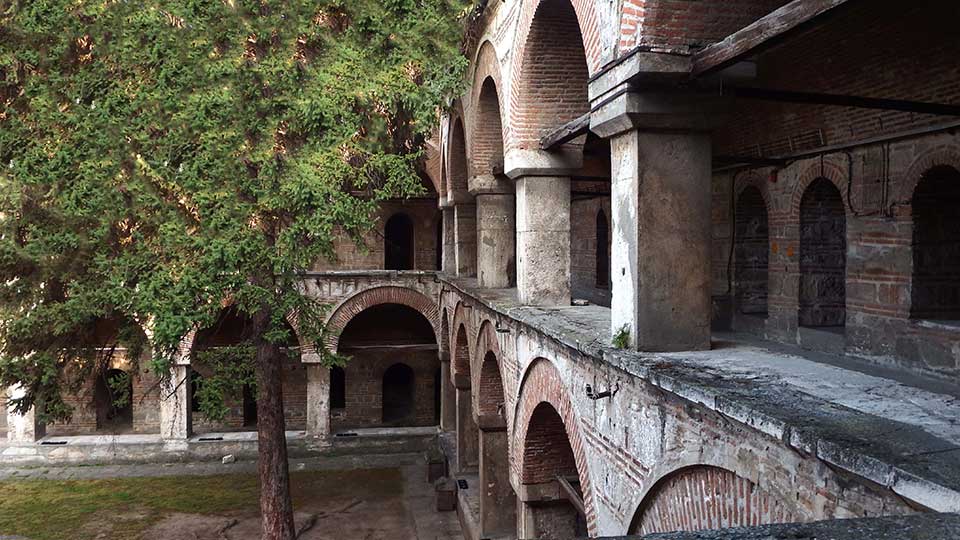 Throughout history, Kurshumli-an served for various purposes. It was initially an and its main purpose was of trade and craftsmanship nature, that is, to accommodate caravans with trade and craft goods. Thus, on its walls signatures of some of the sixteenth century Dubrovnik citizens were found. It functioned as an an until 1787, when it was turned into a prison and again from 1904 to 1912. The an suffered damage from the 1963 earthquake, but was soon restored completely.

The building covers an area of 2.800 m2 with 60 rooms placed on two floors. It consists of two parts, most of which served to accommodate traders with their goods. The other contained a barn and other ancillary premises. The main entrance is located on the south side and leads to the courtyard of the larger part, in the middle of which there is a fountain. Above the main entrance there is a built-in porch with a dome roof. On the left and right side of the ground floor and on the floor there is an open porch, built with large square stone pillars, which are interconnected with semicircular arches.


The ground floor used to accommodate the goods, while on the first floor were the rooms in which the guests rested. The second part served as a horse stable and it was entered into through the greater part or through the entrance located on the eastern side. The walls are built in Byzantine style, with brickwork and stone layers and high-rise windows. Above them there are small domes, resembling pyramids with slightly elevated sides and in the past covered by lead.


Initially, it was known as an "An of Musledin Odza" in honor of the orderer for its construction. It is believed that the name "Kurshumli An", which in Turkish translation means "lead an", was acquired during the 19th century due to the roof that was made of lead.


More information about Kursumli an can be found on this website.