Heraclea Lyncestis - a city settlement from the Old Macedonian time to the Middle Ages. It was founded in the middle of the 4th century BC. by King Philip II of Macedonia as an important strategic point. The remnants of the material culture of the old Macedonian phase of life archeologically have not been sufficiently explored.

Heraclea Lyncestis is located on the southern outskirts of the city of Bitola, at the foot of Mount Baba. It was named by Heracles, the mythical hero and the founder of the Macedonian royal dynasty Argeadi. The epithet Lyncestis, meaning "Lincestid", comes from the name of the Lincestida region in which the city was located, and in which the ancient Macedonian tribe Lincestidi lived. It is located in a fertile plain, from the north protected by Mount Baba, i.e. the hill Tumbe Kafe and the river Siva Voda in the south. 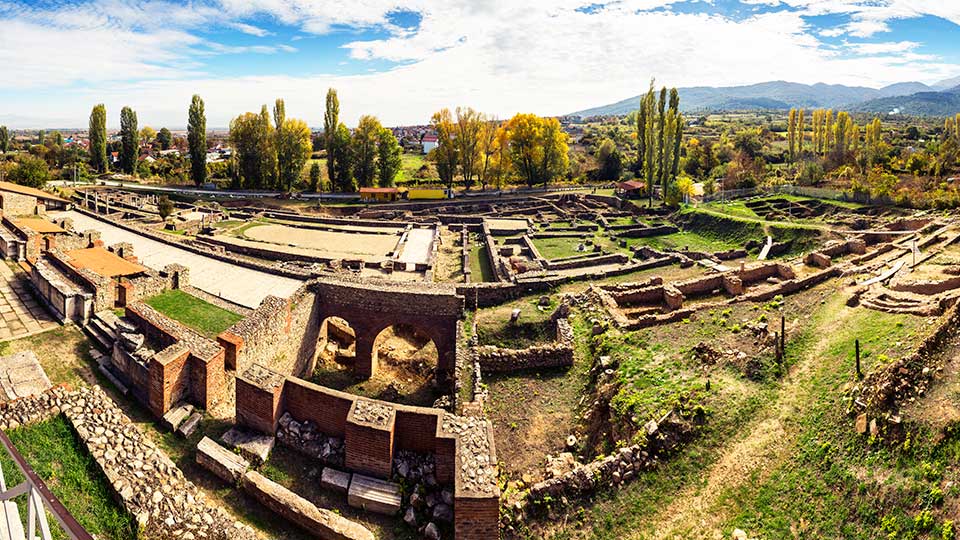 Heraclea survived and developed into a major crossroads on the Via Ignatia road, which linked Durres and Bosphorus. From Heraklea the road diagonally stretched towards Stobi, and then towards Serdika (nowadays Sofia). The city was founded in the pre-Roman period, probably by the Macedonian king Philip II or Philip V. According to the written sources, after the conquest of Lynkestida, Philip II erected a fortress (probably Heraclea), through which he could control a part of the kingdom. There is also a data according to which at the beginning of the second century, BC, during the wars with the Romans, the Macedonian King Philip V built several fortresses in the border areas to secure the border of the kingdom.


After the victory of the Romans and the division of the Macedonian kingdom into four areas (meridas), Heraclea entered the composition of the fourth merida. The city experienced its highest level of civilization development during Roman rule, in the first centuries of the new era, when it gained the status of a colony. During this period Heraclea became a strong economic and political center, with its own permanent Roman viceroy and with its own Roman army. All this reflected on the appearance of the city, so that Roman architecture was largely represented, although the traditional influences and historical benefits still gave their mark to the city. In 473, during the penetration to the south, the Goths led by Theodimer also conquered Heraclea.


A little later (479), the same Goths, this time led by Theodorih, the son of the already deceased Theodimer, again reached Heraclea. The inhabitants of the city sheltered in a refuge (refugium) in the region, while the bishop negotiated with Theodorih. The Gothic leader sought food for his people, and when he did not receive anything, he burned the city. The exact extent of destruction has not been determined. During the 6th century, the city was again attacked by the barbarians, among which were the Avars and the Slavs, and at the end of the 6th century the life in Heraclea definitely ceased.

During the study and research of the site, the remains of the former city were discovered, and reconstruction of its appearance was made. On the northern side of the forum was the portico of the courtroom. It has a rectangular base, on the northern wall of which there are two statues on pedestals and one pedestal without a statue, which as silent witnesses confirm the majestic history of the city.

The statue of Tit Flaville Orestes was made of white marble, and was admired due to its serene beauty in its marcial proportions (the bust of Tit Flaville Orestes was discovered in the temple of Tiha in Stibera). The young woman's body and the common attributes of truth and justice-the scale and the bow-point to Nemesis, the goddess of justice and fate. In the Greek inscription of this statue it is said that this is a gift from the Heraklean citizen Julia Tertila.


The pedestal without a statue with a Greek inscription is dedicated to the same goddess, and in a frame, there is a text, a verse from Hesiod's epic poem, "Hunger and misfortune never come to those heads who fairly judge and they enjoy in abundance the fruits of their devoted labor.".

The building of the thermal spring means the birth of a higher health awareness among the local people. In that respect, the thermal spring can rightfully be considered as the beginning in the later construction of the aqueduct and the expansion of the water network in the 4th century. The thermal spring consisted of a cold water bath - frigidium on the eastern side; bath with lukewarm water - tepidarium in the middle; and a very heated hall in which there was hot water - caldarium and it was in use until the 5th century. 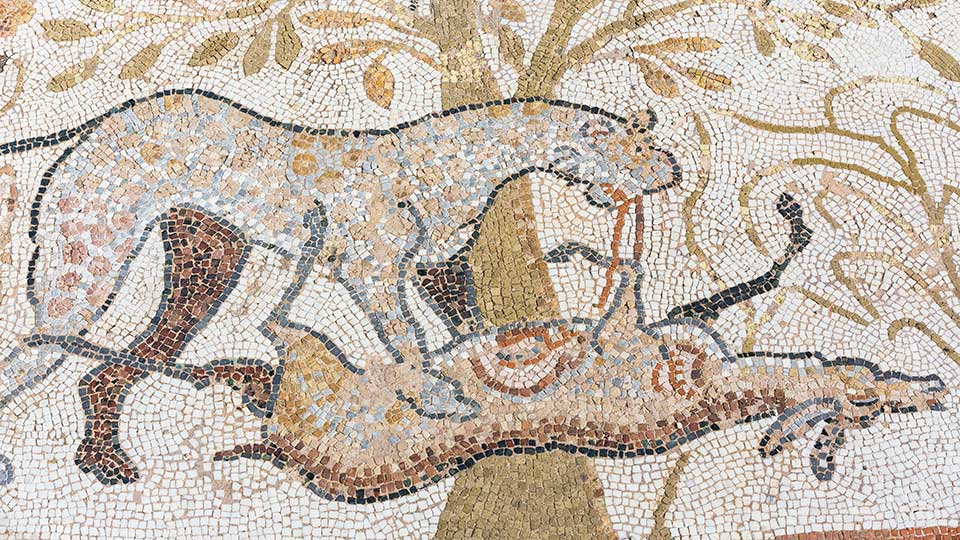 The beginnings of the construction of the theater date back to the time of Emperor Adrian, and the final touches were performed at the time of Antonin Pius. With the discovery of the stage, the double feature of the theater facility was confirmed, for stage performances and performances with animals, which were kept in the three cages. For the safety of viewers a high wall of orthostats around the orchestra with a metal fence on them was erected. The viewpoint has a diazoma with twenty rows of seats, and the Nemesion was placed above the top row. The initial box with seats was between the third and seventh row. The stage consists of five rectangular rooms and a lavishly decorated northern facade. The theater had a capacity of about 3,000 visitors from all classes. 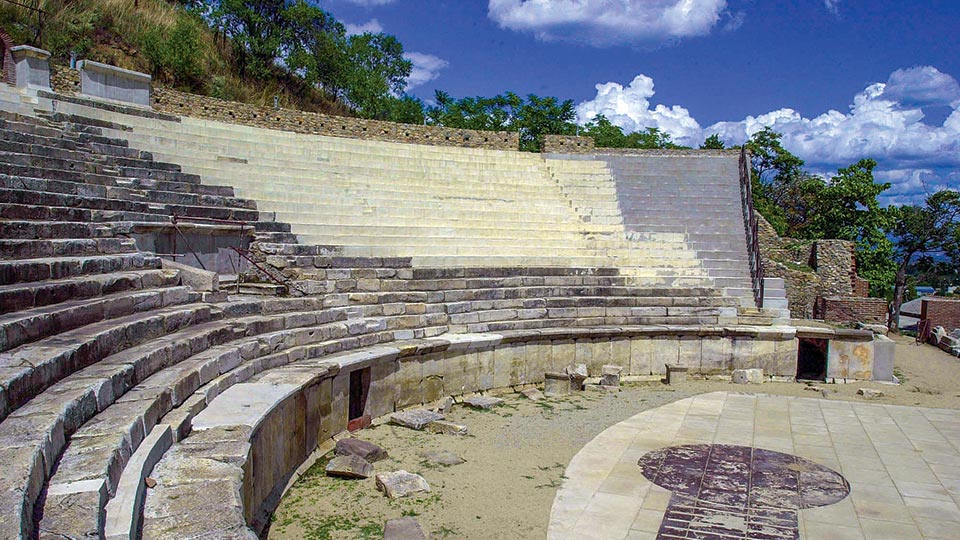 Remains of several sacral buildings, decorated with floor mosaics made in opus sectile and opus tessalatum, dating back to V and VI century, were found on the ground of Heraclea. There is a small basilica, the civil basilica, the grand basilica and the cemetrial basilica. The last one is located about 250 meters from the central city area of Heraclea. In its vicinity early Christian and medieval tombs were discovered.


As a contrast to these magnificent buildings, on the ruins of the old theater, profane buildings of stone and mud were built. Their importance lies in their location, which speaks of the high degree of rationalization of resources and space. 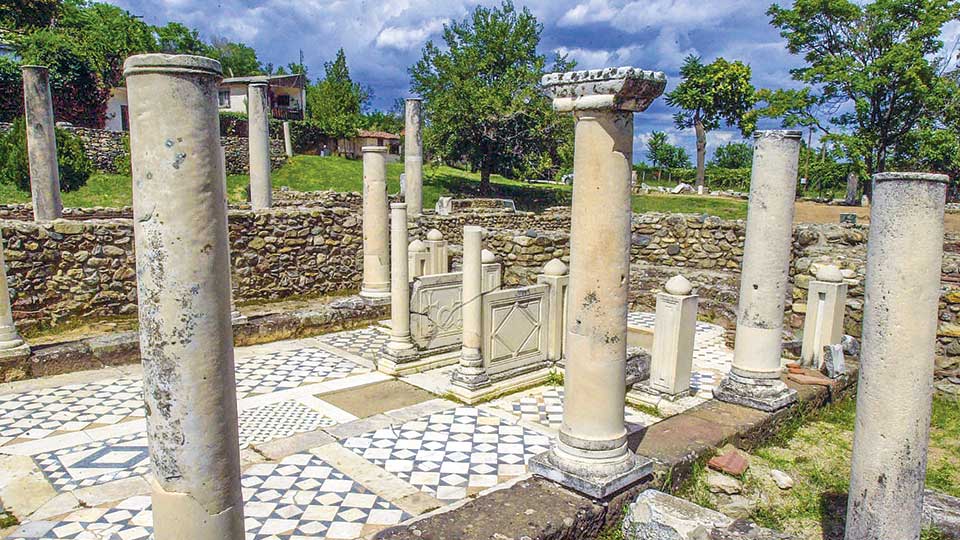 More information about Heraklea Lyncestis can be found on thiswebsite.