The Prespa region is characterized by many sunny days, while along the shore of the Prespa Lake there are several beautiful sandy beaches. You are constantly surrounded by mountains with lush vegetation. All that along with the clear lake water will not leave you indifferent and will constantly invite you to bathing and relaxation. The development of summer tourism will be greatly assisted by the cultural heritage and various facilities and wonderful views and interesting locations, as well as the special organized tours with guide and companion, with a guard service from Marko’s foot, until the village of Konjsko and the island of Golem Grad. Surrounded by mountains from all sides, the Prespa Lake enchants with its extraordinary beauty. While the peaks of Galichica are covered with the first snow, down on the flat area, on the shore of the lake, there are still roses and autumn flowers. 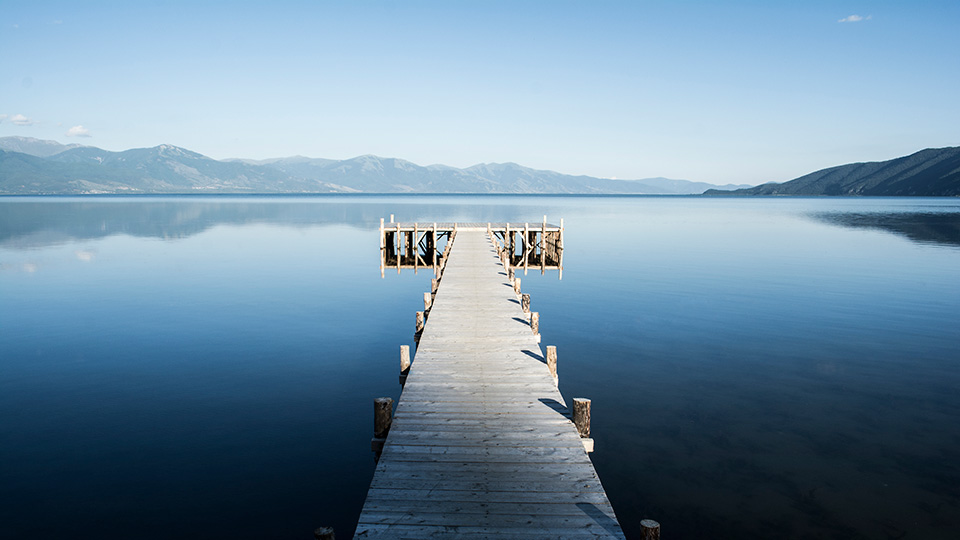 Prespa Lake within Macedonia is located in the southwestern part of the country. In the Macedonian part, the Prespa valley is confined with the mountains of Baba (with the highest peak Pelister 2600m) to the east and Galicica (2235m) to the west. To the north are the Mountains Plakenska and Bigla (1933m), and to the south of the Albanian part is Gorbach (1750m) and the slightly lower parts of Galichica. In the Prespa valley there are two lakes: the Small and the Great Prespa Lake. In the waters of the Great Lake is the triangle of the Macedonian, Albanian and Greek border.


The Great Prespa Lake covers an area of 284 km2, with a 54m greatest depth and an altitude of 853m and is one of the cleanest lakes in the world. Of the total area of the lake, 65% belongs to Macedonia, 18% to Albania, and 17% to Greece. On the Macedonian part of the Great Prespa Lake, the main tributaries bringing its water are the rivers Istocka, Pretorska, Brajcinska and Golema Reka, which passes through the city of Resen. The lake loses its water due to the limestone character of the Mountain Galicica, and flows into Lake Ohrid at "St. Naum" and Biljanini Izvori. Prespa Lake receives water from underwater springs and from the few rivers flowing into it. 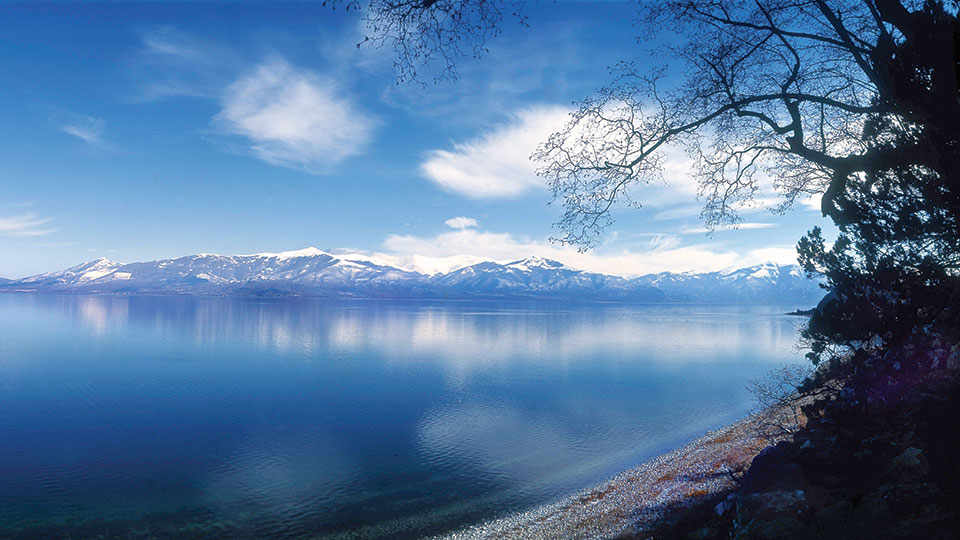 Golem Grad - a unique island in Macedonia on Prespa Lake

In Prespa Lake is also the only island in Macedonia – Golem Grad. This island is 750 meters long and 450 meters wide. It is a natural rarity and a reserve of rare herbs and a variety of flora and fauna. It is also known as the Snake Island, because it is abundant with the water snakes Natrix natrix, but also with the poisonous viper, which can be found in the upper part of the island. The island may be reached by a boat from two places, where there are small beaches and cracks in the rocks. 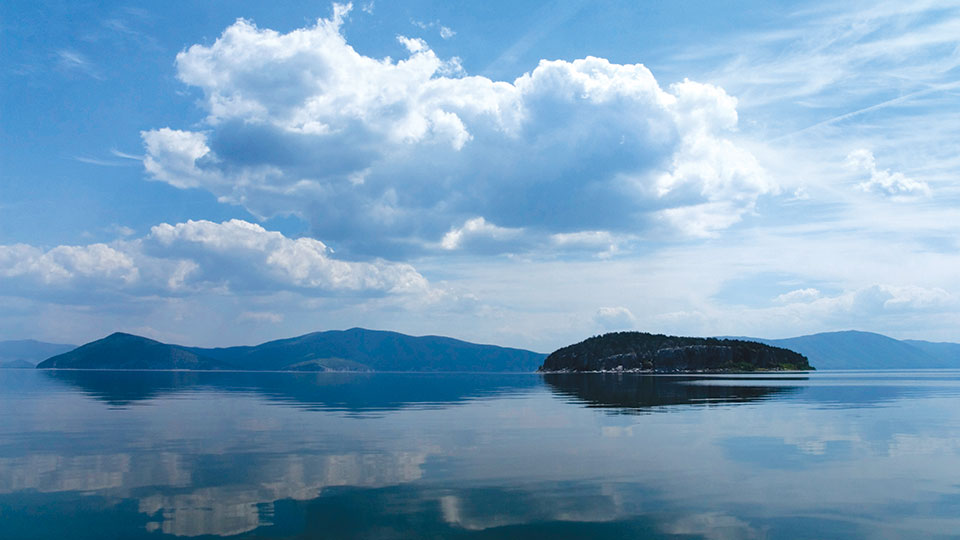 The pelicans have a six-month stay on the island, and the most numerous birds are cormorants, for which the island is an ideal place for reproduction. The foya grows on the island, the half-dry trunk of which are more than a thousand years old. Traditional boats were made from this tree. The island Golem Grad is considered a strict natural reserve of Prespa Lake, due to its specific geomorphological characteristics, its characteristic flora and fauna and its historical past. Archaeological examinations are performed every year on Golem Grad, and there are archaeological sites from the early Christian period and a basilica from the Slavic period.

The pelican, as one of the largest birds that exist on water, mainly in warmer regions, is present only in the two Prespa Lakes (the big and the small one) in our country. Every year it has a six-month stay (April 15 - October 15) in a flock of hundred bird. It spends the remaining annual period in the southern countries of the globe. The arriving of these white birds with big beaks is not very noticeable, but during the autumn migration they gather in clusters and after a one-day circulation over the Prespa valley, they head to their winter resorts. 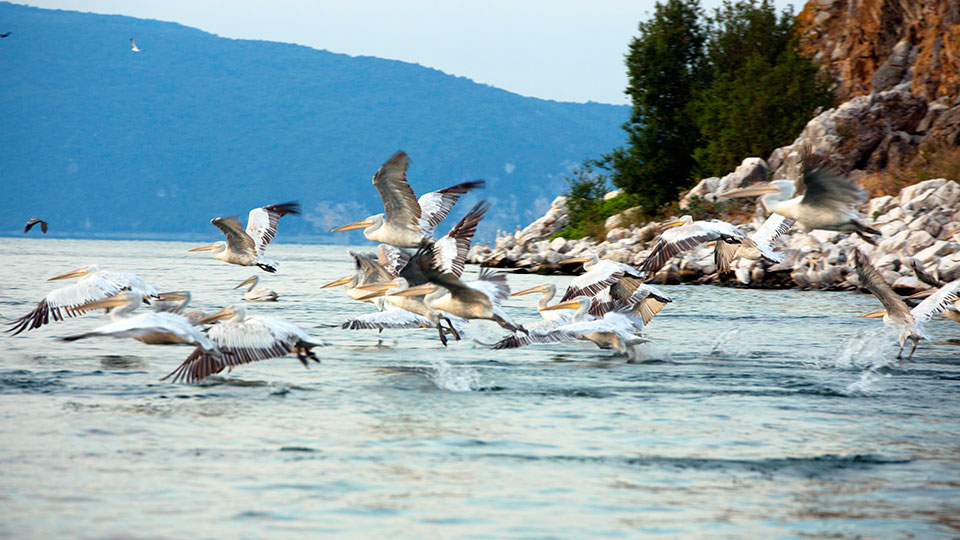 The Pelican does not dive under the water of Prespa Lake, but only swims on the surface. With its strong instinct it discovers the groups of fish and as soon as it reaches the target, flocks of cormorants flock to it, which by chasing fish and diving create a symbiosis-a common nourishment. A really interesting phenomenon. During the last three decades, swans fly over to Prespa Lake, which was not the case before. Flocks of 4-8 birds come in spring or autumn and stay for two or three months. In comparison with pelicans, swans are tamed, mostly by feeding. Their gracefulness surpasses the beauty of long-beak nesiti. 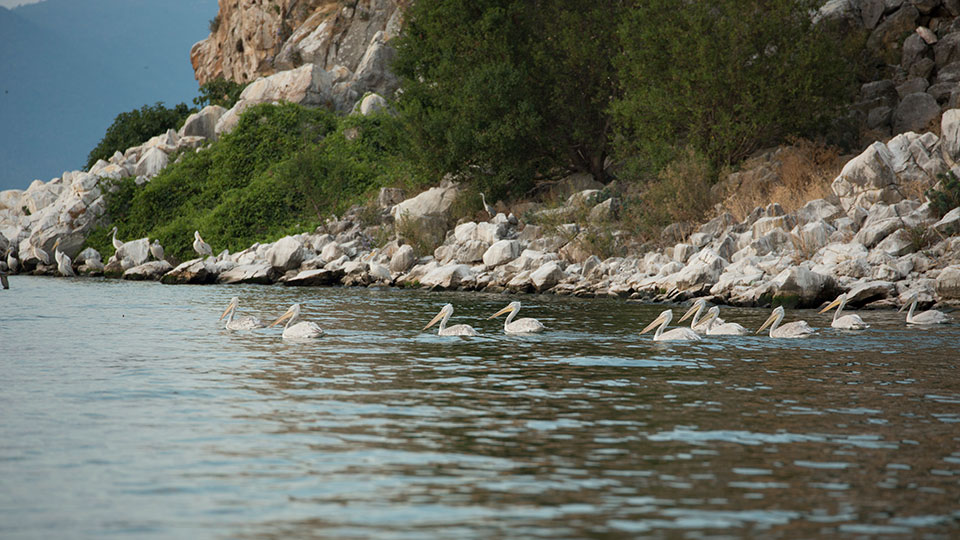 Flora and fauna in Prespa Lake

In terms of fauna, a special place is the ornithological reserve "Ezereni" on an area of 2080 hectares. In Prespa about 100 bird species find their shelter. Prespa Lake is rich in fish, and especially the Prespa carp and the fish belvica-nivicka are known. The most common is the nivicka or the belvica, then the carp, the rudd, the common nase, the barbel, the chub, etc. At the end of the 1950s, Lake Prespa was stocked with Ohrid trout, which remained in the deeper waters, the Nivic Bay, Kazan and Konjsko. 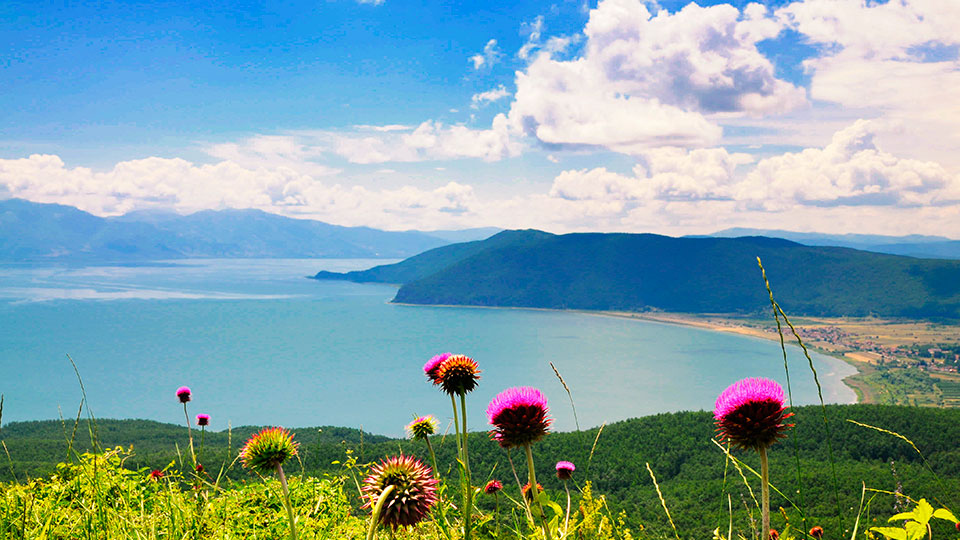 This ambient attracts many birds. The most numerous are cormorants fed only with fish. Endemic birds are present as well as migratory birds that stay in the spring-summer period and migratory birds staying shortly in the nearby marshes as a stopping station for resting and eating. Attractive in the waters of Prespa Lake is the white pelican, which catches fish along with the black raven. In shallow waters there are many species of herons, little grebes, gulls and other birds.

The plant life is quite rich, both in the Prespa Lake itself and in the surrounding marshes. On the island of Golem Grad, foya forest (Juniperius Foeditissima) is encountered as an endemic plant.

The legend of the origin of Prespa Lake

On the site of today's beautiful Prespa Lake, according to the legend, a wide fertile field was found. In the vicinity of the hill there were seven springs, which were never frozen. Their clear waters were a pride for the whole valley. In the evening, the springs were closed by taps. At that time, two tribes were continually fighting for the beautiful valley. The daughter of the duke of one of the tribes, Prespa, was very beautiful. Every night she went down the hill, to the springs to get water. Once, at the springs, Prespa saw the son of the duke of the other tribe. Their looks intercepted. Their hearts trembled. Love was born. Since then, the young people have begun to meet secretly.


One evening, the young son of the duke, whose name was Labid, waited for the beautiful girl not far from the springs. She ran and approached him intently. The pretty girl, light as a doe, deliberately pulled out the seven taps from the springs and the water sprung up and down the valley ... When the boy saw her, with several leaps he intercepted her and they stood face to face. They held their hands and headed for the hill, they embraced and fell into a love game. The sound of the water and the love game made the two young people fall asleep.


When they woke up, in the early dawn, a gray-green lake appeared in front of their eyes ... Until then, the guards of the two tribes informed their dukes about the rise of the water level, and the tribes went on their way - one went south and the other settled in the foot of Galicica ... Labid embraced Prespa and kissing her, he said: "Now there is nothing for our tribes to fight about!" The young got married, and the lake that was created, in honor of the beauty, was called Prespa Lake, and the settlement around it it was named Prespa. 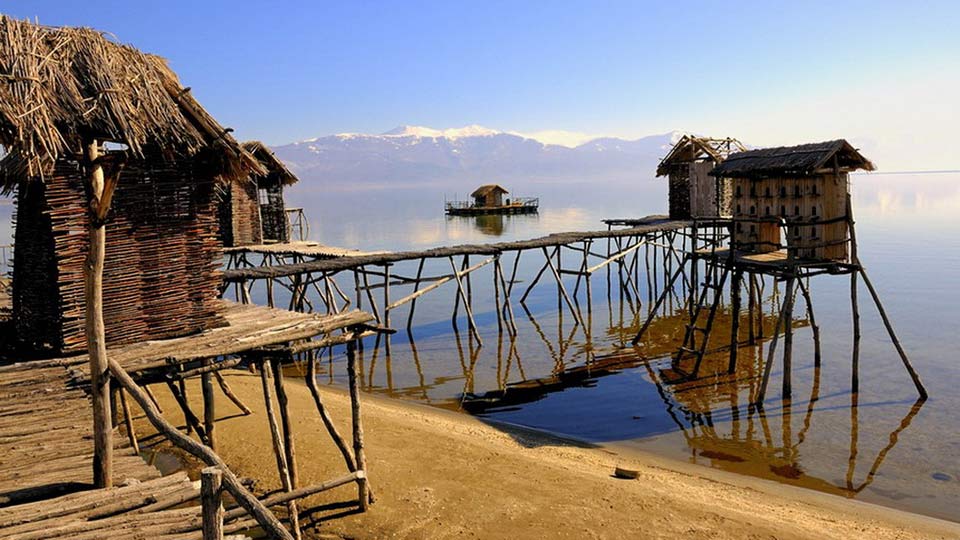 The legend of King Marko on Prespa Lake

The legend says that Krali Marko wandered along Lake Prespa and wanted to see the small lake Mala Prespa. He climbed on one stone, and being very strong, left a footprint on it. That piece of stone still stands there, at the border crossing with Greece, which carries his name and attracts many tourists. They say, if you put your foot, you will notice that Marko must have worn shoes at least 90 in size.


More information about Presta lake can be found on this website.