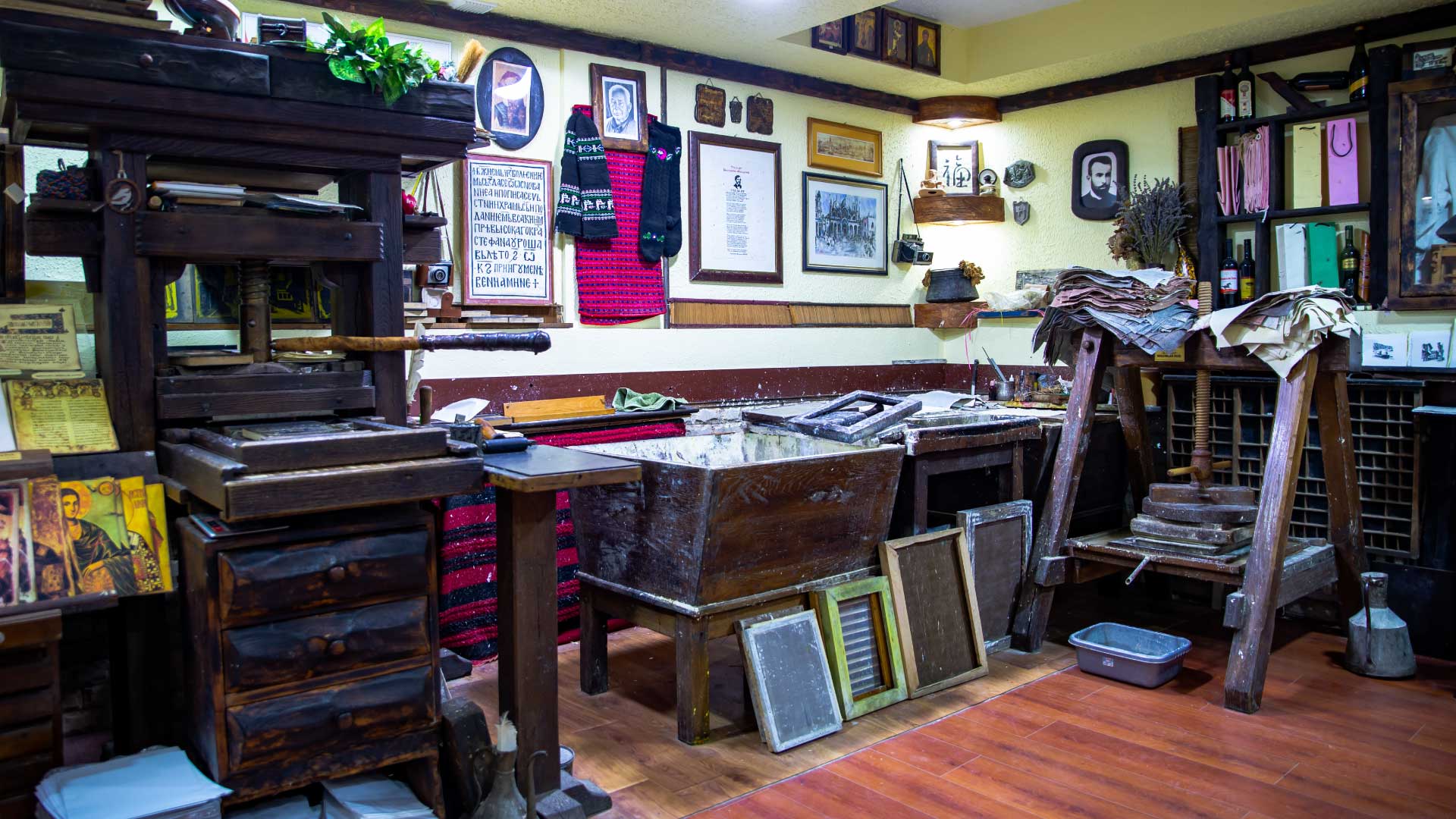 The Craft of Papermaking

The tradition of making paper in Macedonia begins in the middle of the 16th century (1560-1570), in the Monastery of Saint Naum (28 km south of Ohrid). It is assumed that the procedure of making paper was adopted by Jacob, a Macedonian priest who was at that time working in Venice. In that period, Venice was one of the most important centers of printing and papermaking. The equipment in the Saint Naum Monastery was made according to the blueprints and sketches brought back by priest Jacob. Due to its location, the Monastery of St. Naum was relatively isolated and functioned as an independent enclave. The paper was used exclusively for internal needs. With the destruction of the Monastery at the end of the 16th and the beginning of the 17th century, the workshop itself was also destroyed.

The National Workshop of St. Naum of Ohrid is an attempt to reconstruct the 16th century one. The procedure is authentically identical to the oldest Chinese procedure originating from the 2nd century BC. The procedure was transferred to Europe in the 13th century. The basis for making paper is the core of the tree. Cotton is added as needed, as can be various natural accessories, to decorate the paper (flowers, petals, various types of tea, tobacco, coffee, etc.) The originality of this procedure (wasp nest method) gives the paper special uniqueness and value. It is typically done by vertical splitting of the tree core (into the smallest hairs) at a special angle, depending on the type of tree. 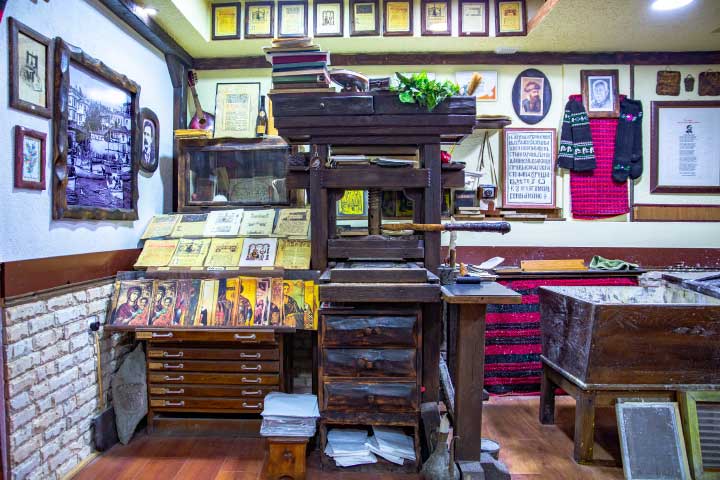 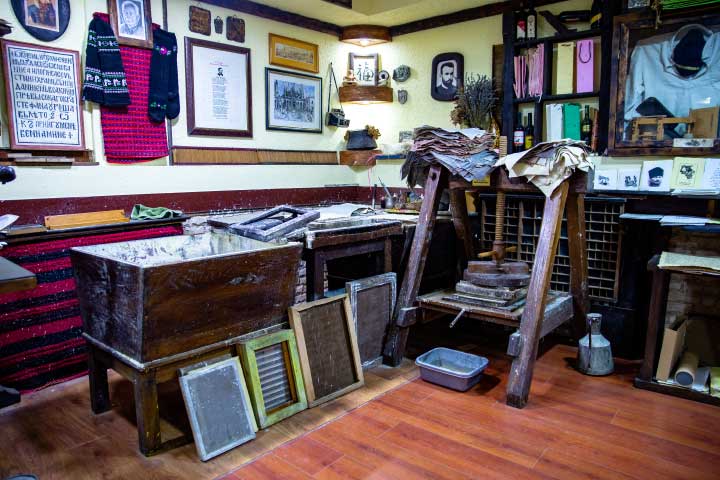 The papermaking procedure is completely natural, involving no use of chemical additives and glues. A rarity in the National Workshop is the Gutenberg press, an authentic copy of the original found in Mainz, Germany. The press is made according to the original one and operates on the same principle. The Gutenberg press in the workshop of Mr. Panevski from Ohrid is of great historical importance, as there are only three of them in the world, one of which is in his workshop, where he applies this method of production in contradiction of all modern methods of paper production and printing. “The equipment and clothes we use are authentic; the most important segment is the angle at which the wood is split and the binding of the fibers from the plant’s core.

The base is the core of the tree. The types of wood used include harder trees, such as oak, walnut, cherry, chestnut, spruce and mulberry. Although paper made from mulberry is considered to be one of higher quality, the best quality paper is made from the core of the cherry tree. The ends of the tree's rings determine the angle of the cut. The wood must not be crushed or ground. The essence of the procedure is obtaining fibers from the core of the tree. After a period of incubation, the fibers bind naturally. It takes about 29 days to produce one sheet of paper in this manner. The longest part of the process is the incubation of the fibers, which lasts 23 days", Mr. Panevski explains.

The workshop is visited by more and more guests and tourists every day and is a part of the city’s tourist offer, while also being a corner that relaxes and takes you back to the past, as if in a daydream. "All kind of tourists come to the workshop - from ordinary citizens to diplomats and presidents of states. The guests want to buy souvenirs made of handmade paper, and we can print various motifs upon request. The motifs of our prints are different, starting from old photographs of Ohrid, authentic icons from this region, gospels from these areas, and maps", Mr. Panevski highlights. Panevski Nino, son of Ljupcho, the owner of the workshop, says that - following the old way of papermaking - he uses a sieve with a wooden frame and a wire mesh, as well as some drainage and drying equipment, with cotton used in the production of paper in addition to the content of wood fibers. "It is made on the same principle that the Chinese applied when they first started producing it, two centuries BC. They got their inspiration from the wasp's nest and came up with the idea to cut the core of the tree at a certain angle, in the same way as the wasp fastens the hairs in its nest", Panevski from Ohrid, who inherited the craft from his father, explains. “Once the paper is laid down on the prepared canvas, you get the final product – a sheet of paper”, this young man from Ohrid says.

“Once this procedure is completed”, he says, “the sheet is not even and is therefore taken to a press to be evened out and ironed. After ten hours, the sheet of paper is ready to be printed on or used to manufacture bags and other products.” The story of the creation of this extraordinary workshop begins in the distant 1989, during Panevski's visit to Slovenia, as part of the Stability Pact for setting up new small businesses. During his visit to Slovenia, he made contacts with people engaged in a wide variety of businesses, some of which were small and some large. The turning point of the whole story happened during a visit to the workshop in Radeche, where Panevski spent most of his time. In the period since 1992, he paid several more visits to the same workshop, during which he was specifically involved in the craft’s processes. After that, the owner of the Slovenian workshop visited his friend from Ohrid on several occasions, and the idea of establishing a workshop for handmade paper right here, in Ohrid, was born for the simple reason of Ohrid being the city of literacy. 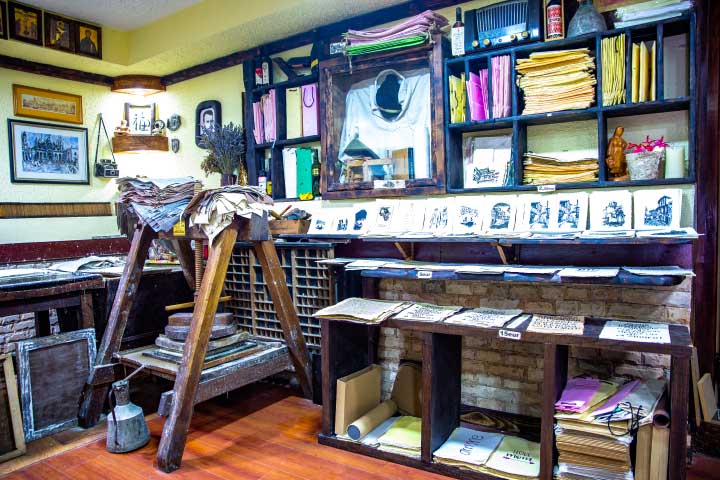 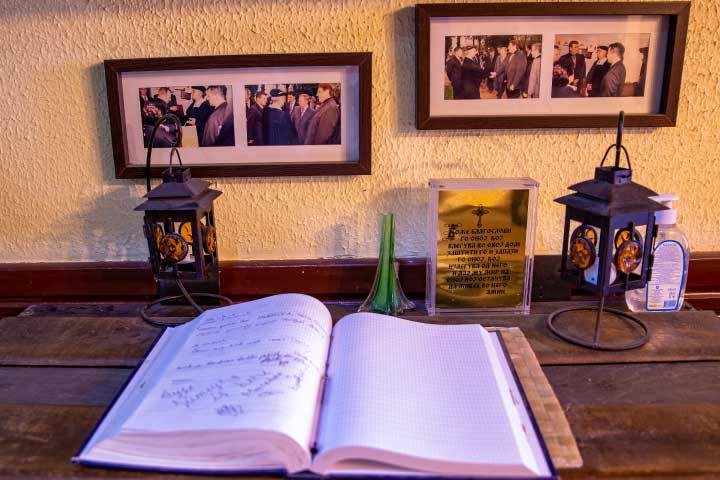 The workshop was open in October 23, 2002, which means it has been operating successfully for many years. “It was a particular pleasure for us that the workshop was officially opened by the late President of the Republic of Macedonia Boris Trajkovski, whom we presented with the first produced and printed sheet of paper with a portrait of Alexander the Great. Our basic mission and activity is handmade paper and paper products. The workshop has a touristic dimension to it; we show the visitors how the production actually takes place in a few minutes, provided that one has knowledge of the history of paper and Gutenberg's printing method. The printing method is identical to the one applied to make the first-ever copy of the Bible in the 15th century. This press is a rare and authentic copy of the original, which is kept in the museum in Mainz, Germany, and operates in the same way. I must mention that tourists are delighted from the moment they enter and almost no one leaves without at least one sample of printed paper, with most of them buying paper sheets with different applications that we also make and some of the various souvenirs that can be found in our workshop”, Panevski states.

The workshop manufactures a wide assortment of paper products, mainly souvenirs that are sold. With the applications affixed on paper, such as the four gospels and other excerpts from the Bible and the life of the early Christians, these products have an authentic value in themselves, just like the various icons and frescoes of famous saints towards whom people from Ohrid and all parts of the country and beyond cultivate special piety. Then, there are notebooks with thick leather covers produced by the workshop, various applications for pencils and other articles, picture frames with Christian motifs, badges that are especially popular among young people, various other school items, black and white pictures, Ohrid landscapes, as well as photo shots of the Ohrid architecture and similar products in various sizes, as requested by the visitors. The paper workshop (or museum), which has preserved the spirit of the old Ohrid style, is a significant cultural entity not only in Ohrid, but also beyond, and creates a true tourist experience. This family craft of Panevski also requires a lot of physical labor and dedication. Considering that it has many artistic elements, it is also an attraction of its kind, enriching the tourist offer of Ohrid.